Welcome to the largest online collection of Trump-related nicknames, puns and jokes—all completely free and without annoying ads (we too loathe pop-ups). Now you can astound your friends and confound your political foes with the perfect nicknames for every occasion! Trump nicknames range from A to Z, from Agent Orange to the Zodiac Biller. Our favorites include Putin's Puppet, Hair Hitler, Hair Fuhrer, The New Furor, Adolph Twitler, Tweety, Tsarzan, King Gorge, Conigula, Gingervitis and Dire Abby. There are "superhero" nicknames like Bratman, Stuporman, Captain Shamerica and The Super Duper. But perhaps no nickname captures the "surreal Donald Trump" better than Donald Drumpf and Drumpfkopf. You can employ your browser's search feature or use CTRL-F to find nicknames for Trump's family, friends and lapdogs such as Melanoma (Melania Trump), Proxy Wife (Ivanka Trump), Aide de Kampf (Jared Kushner), Wrongway Conway (Kellyanne Conway), Koch Addict (Mike Pompeo and Mitch McConnell), Cruella DeVile (Betsy DeVos), Paul Ruin (Paul Ryan), Detourney General (Jeff Sessions) and HUD Ornament (Ben Carson). We also have Trump family nicknames like The Brooklyn Hillbullies and Trump administration nicknames like Moscow on the Hudson, the Ogle Office and The White Supremacist House, so please prepare to be entertained!

Donald Trump is now ahead of Hillary Clinton in the polls. This was just reported in The Washington Post, and 2,000 years ago in the Book of Revelation. ― Conan O'Brien

OMG, in a single day Trump claimed to be the King of Israel, the Second Coming of God and the Chosen One!

Let's get this straight: Trump releases the Nunes memo and the stock market immediately crashes 666 points. The federal budget deficit Trump's first fiscal year was 666 billion dollars. Trump's family purchased 666 Fifth Avenue, a street symbolic of money (Mammon). The Trump Tower is 203 meters tall, or 666 feet high. On the Ides of March, the day when the Roman republic became a dictatorship, Trump had 666 delegates. He was born on a blood moon. His ancestor who started the Trump family business died on 6-6-6. Her name was Elizabeth Christ Trump. Elizabeth means "oath" or "vow" so her name literally means "vow for Christ to be trumped." Is it just me, or are we living in a real-life Omen movie?

For a YUGE slew of 666 connections, see Is Donald Trump the Antichrist?

The Top Ten Donald Trump Nicknames of All Time

(#1) THE ANTICHRIST — when the prophets spoke of the "Trump of Doom" and a "little horn" were they speaking literally?
(For a YUGE slew of 666 connections, see Is Donald Trump the Antichrist?)
(#2) Short-Fingered Vulgarian — by Graydon Carter (a nickname Trump hates because he thinks it implies that he's under-endowed "down there")
(#3) Agent Orange — by Anonymous (a lethal product of deMonsanto and DonSatan)
(#4) Golden Wrecking Ball — by Sarah Palin (who was not trying to be funny)
(#5) Fuckface von Clownstick, Comedy Entrapment and Unrepentant Narcissistic Asshole (the UNAbomber) — by Jon Stewart
(#6) The White Kanye ― by Bill Maher (or is Trump more accurately the Yellow-ish-Orange Kanye?)
(#7) Lord Voldemort, Orange Anus and Snake Oil Salesman — by Rosie O'Donnell
(#8) The Trump of Doom — by Michael R. Burch (adopted from the Bible and first used in a possibly prophetic Facebook post on September 11, 2015)
(#9) The White Pride Piper — Trump is the poster boy for the "Make AmeriKKKa Grate Again" movement of white supremacists, neo-nazis and skinheads
(#10) Man-Baby — by Jon Stewart (this one inspired an avalanche of jokes and similar nicknames; for instance, Robert De Niro called Trump "our Baby-in-Chief") 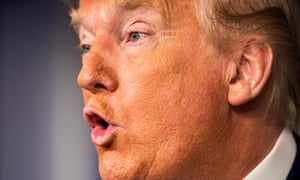 This picture is proof positive that Trump is Coronavirus in Human Form! ... er ... make that Coronavirus in Semi-Human Form! The virus is actually oozing from Trump's pores! Or has Trump had one too many golden showers? 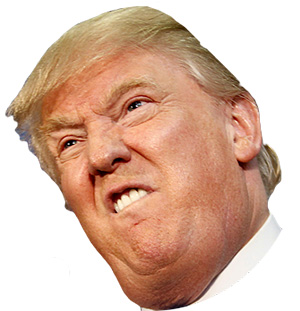 Millions of Americans have been mobilized in peaceful marches across the nation to protest Tiny Man Trump's creation of a Tiny Man Square in the heart of the American capitol.

In the middle of the coronavirus pandemic, with more than 100,000 Americans dead and the death toll rising inexorably every day, Generalissimo Trump ordered rubber bullets, flash grenades and tear gas to be fired at peaceful protesters so that he could have his freakin' picture taken like a third world dictator! This was a ploy so foul even Anthony "The Mooch" Scaramucci objected, tweeting: "Trump fired tear gas and rubber bullets on peaceful protesters so he could get a photo op in front a church that didn't want him there, holding a Bible from which he cannot name a single verse, all to prove he's not a coward hiding in his bunker again. A perfect encapsulation [of Trump being Trump]." The church's bishop accused Trump of using it as a "prop." Don Lemon called Trump a Pretend President for posing with a Bible he has obviously never read, much less attempted to live by. Meanwhile, Tyrant Trump threatened to "dominate the streets." Is this the last episode of Celebrity Apprentice President before the abysmal show gets canceled permanently?

Now the Bunker Boy — make that Bunker Baby — whines that he was just "inspecting" the White House bunker. But if Melania and Barron were with him, it obviously wasn't an "inspection." So which is it, Captain Shamerica? Did you cower in the bunker by yourself, like an abject coward, leaving your wife and child to fend for themselves? Or did you take them with you, meaning it was no inspection? Either way you are unfit for office.

Don the Con is killing Americans with his lies and ignorance:

But the Teflon Con's protective undercoating is wearing thin, as his polls drop with every lie he tells about the "perfect" job he's done while being "totally in control" of the coronavirus.

General James Mattis, a former Secretary of Defense, called Trump what he so obviously is: an Immature Man-Baby who plays at being president. Admiral Michael Mullen, a former Chairman of the Joint Chiefs of Staff, said he was "sickened" to see the American military used for a cheap photo-op by Widdle Donnie Whinydiaper. Leon Panetta, a former Secretary of Defense and CIA Director who served under nine presidents, called the self-alleged "wartime" president AWOL for disappearing during a national crisis to play golf, declaim about his hair and rage-tweet.

These are Trump nicknames coined by the people who know him best — his family, friends and co-workers:

According to Mary Trump, after her father had the heart attack that would kill him, Donald Trump didn't go with him to the hospital and didn't visit him, but instead went "to the movies."

That yellowish-orange corona of "hair" is a dead giveaway ...

"When the coronavirus came, Trump froze like a deer in the headlights."—Joe Biden campaign ad

New York Governor Andrew Cuomo blasted Trump for his ludicrous claim that 99% of coronavirus cases are "totally harmless." Cuomo accused Trump of "enabling the virus" when he "makes up facts" in deceitful attempts to deny the current crisis exists. "He is facilitating the virus," Cuomo said. "He is enabling the virus by statements like that. And you're seeing the infection rate go up, and you're seeing the economy suffer, and he is part of that current debacle that we are in."

Piers Morgan, a former Trump friend and supporter, was unfollowed by Trump after Morgan called his brainstorm to inject coronavirus patients with lethal disinfectants "batshit crazy." However, it seems unfair to bats to compare their innocent feces to Trump. In his latest act of sheer imbecilic insanity, the Giddy-ot wants to paint his nonfunctional wall black, at a staggering cost, on the theory that it will be too hot to touch. Apparently Trump has never heard of an obscure thing called "night."

This sad, embarrassing wreck of a man-baby. — George F. Will

The picture above―the earliest known image of The Donald―is evidence that he was suckled in Emperor Palpatine’s romper room. Now in the American Game of Thrones, he is Donald Littlefinger, a master of lies, deceit, treachery and treason.

He's a Man-Baby. He has the physical countenance of a man, and a baby's temperament and tiny hands. ― Jon Stewart

Nancy Pelosi's "seal" of disapproval was the highlight of Trump's lie-filled, self-glorifying State of the Union Address. The Pelosi clap-back came in a meme-able moment after Trump whined about "the politics of revenge" even as he wallowed in it.

Sarah "Suckmypee" Sanders explained away Truant Trump's "executive time" as his need to have a "more creative environment." All those golf vacations are like a kindergartner's recess! Watching TV for hours on end is like Sesame Street! Shutting down the government for a month is like time out! But perhaps we're better of with a Part-Time President, considering how much damage Felonious Punk could do if he worked full-time!

According to witnesses, Little Donnie Two Scoops was delighted by roadblocks for his motorcade, exclaiming gleefully: "The roads are closed for me!"

"I have the absolute right to do national emergency if I want!" Trump insisted to reporters, sounding like a Huffy Kindergartner in need of a nice long nap. Because he whines like sleep-deprived terrible tyke, Trump is also Whiny the Pooh.

After his retirement as head nanny to Widdle Donnie Diaperpants, General John Kelly was asked what he thought about Donald the Menace being "proud" to shut down the federal government over his wall. “To be honest, it’s not a wall,” Kelly replied.

Call him Fragile Man after Trump tweeted "Wasn't I a great candidate!" while the nation mourned the deaths of 17 children in the Parkland, Florida high school shooting. While visiting the devastated community Trump was photographed grinning and flashing thumbs-up signs, so call him Mr. Inappropriate. A few days later, the slaughtered students apparently forgotten, Trump hammed it up at CPAC, saying "everything is wonderful" while praising the NRA and leading cheers for the Second Amendment. Then as the frightened child survivors marched for their lives, Trump took yet another golf vacation, so call him The Bogeyman.

The president has zero psychological ability to recognize empathy or pity in any way. — former White House chief of staff Reince Priebus

He’s an idiot. It’s pointless to try to convince him of anything. He’s gone off the rails. We’re in Crazytown. — former White House chief of staff General John Kelly

Folks, this is what Trump's nannies say about him. Before Trump, the White House chief of staff was someone who respected and represented the president. With Trump the position is very different and the main goal is to try to keep him from going completely off the rails. For instance, by hiding dangerous things he intends to sign, until he forgets about them!

Q: What do you call it when a Man-Baby takes over the American government?
A: Coup d'Tot!