This page contains the best Ann Coulter nicknames, quotes and jokes that I have been able to find ... 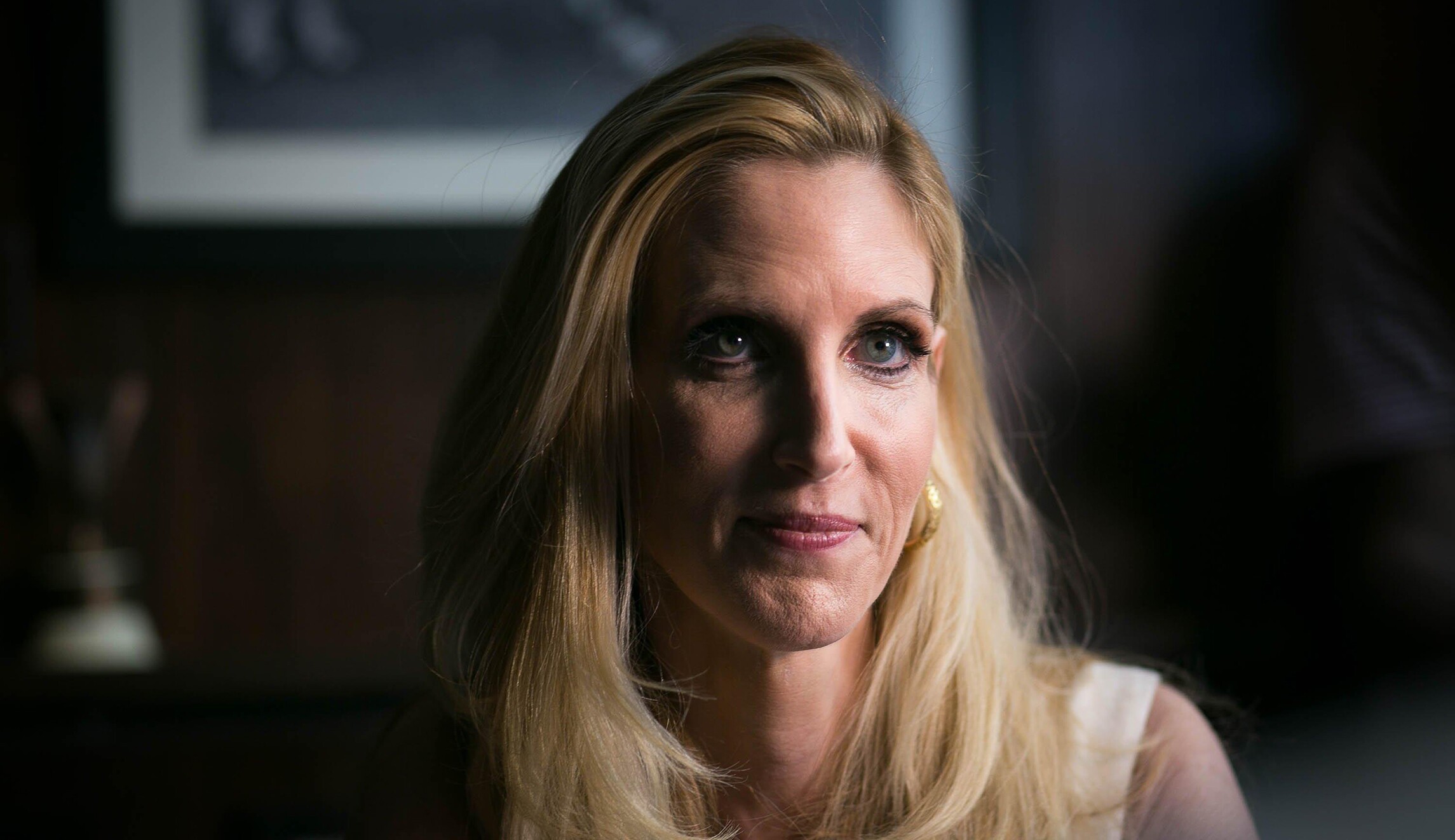 Ann "Crazy Eyes" Coulter contemplates her Master Plan to invade and crush Canada, perfect the Jews, invade Muslim nations and convert them to Christianity at gunpoint, "rape the planet," publicly flog and humiliate black children, arm women while taking away their right to vote, and generally create Hell on Earth!

In a series of tweets ultra-conservative Ann Coulter called Trump a "disloyal actual retard" a "shallow and broken man" a "complete moron" an "idiotic meddler" and a "lout" who is incapable of even "pretending to be" a "decent, compassionate human being." Coulter tweeted: "COVID gave Trump a chance to be a decent, compassionate human being (or pretending to be). But he couldn't even do that." She also called Trump "the most disloyal human God ever created" and a "complete blithering idiot."

AnnThrax
Coronavirus in Semi-Human Form (the blonde corona of hair is a dead giveaway!)
Coultergeist

Ann hopes the Republicans can hold onto the House so she can still haunt it. — David Spade

Chairman Ann Coulter became the Acting President of the United States during a podcast interview with The Daily Caller, when she said Trump's presidency would be "a joke" that will leave "no legacy whatsoever" if the border wall isn't built. Trump then bowed to her wishes and shut down his own government like the dutiful pawn that he is.

Coulter observed that Trump was "surprisingly Oprah-like" and later accused him of jerking his supporters around on immigration.

When Trump finally caved on his border wall, Coulter 45 called him the Biggest Wimp in the history of the presidency and demanded veto power over him in an interview with Bill Maher: “I promise you the country would be run much better if I had a veto over what Donald Trump is doing. It’s crazy that I expect a president to keep the promise he made every day for 18 months!”

Sean Hannity agreed with Coulter, calling Trump's cave-in a "garbage compromise" after the promised continent-spanning wall had been reduced to a tiny ornamental trellis. Coulter then accused Trump of cowardice by calling his compromise the "Yellow New Deal."

When Howie Carr asked Coulter if she was looking forward to Trump's speech in El Paso about "finishing" the border wall, she observed that Trump "gives good speeches," then snickered. Coulter explained her cynicism by pointing out that Trump had promised to start building the wall on "day one" of his presidency, and that he had made that false promise "over and over and over again." He had also promised to "fully enforce eVerify" when it turned out he hadn't even bothered to enforce it at his own golf clubs! He had furthermore promised to "throw out all of the gangs," which also hasn't happened. Coulter "rightfully" concluded that Trump has spent "more than two years not doing the things that got him elected."

The Shill of Rights
Constitutionalist Coulter

Constitutionalist Coulter is not a fan of Trump's reading skills or his understanding of American government. She said: "Someone has got to read the Constitution to him" when she was asked if she thought Trump would declare a national emergency on the southern border. “We put this lunatic in the White House for one reason!” Constitutionalist Coulter told Yahoo News. “He doesn’t need to declare an emergency!” According to Coulter, in addition to being a "lunatic," Trump is also "lazy" and "incompetent" and just needs to pop out his "pocket Constitution" in order to understand his presidential powers.

After Trump agreed to accept funding for just 55 hours of border fencing, Coulter tweeted: "Trump is the American Merkel. But who cares about Germany? Trump just destroyed the U.S.A."  She also tweeted: "There's no coming back from this. No 'emergency' or presidential powers will allow him to build the wall, ever, after he signs this bill. Trump has just agreed to fully open borders." She also accused Trump of lying to and scamming his base: "The goal is to get Trump's stupidest voters to say 'HE'S FIGHTING!' No he's not. If he signs this bill, it's over. No, the goal of a national emergency is for Trump to scam the stupidest people in his base for 2 more years."

Laura Ingraham agreed with Coulter, calling the new spending bill a "total SCAM." Ingraham said the bill was "tantamount to an illegal immigration 'stimulus' and 'de facto amnesty.'" She concluded: "This 1,169 page monstrosity will green light more 'family units' crossing illegally—without a doubt." Ingraham predicted that Honduras and Guatemalan residents would form new caravans upon hearing about the bill.

According to CNN, Trumped begged Laura Ingraham and Sean Hannity to put "positive spin" on the bill.

Ann Coulter understandably has reservations about Trump. After he said she was "off the reservation" and disavowed knowing her or being influenced by her, she responded: "It’s the nicest thing he could say about me, completely absolving me of responsibility for his total capitulation on immigration, the issue that put him in the White House."

Coulter is smart enough to know Trump is not going to deliver the promised wall or downgraded fence with a "national emergency," which is merely a ploy to fool his dumbed-down base now that the barrier is kaput: "It was the one thing, the promise he made every single day at every single speech. Forget the fact that he's digging his own grave. The only national emergency is that our president is an IDIOT." Coulter correctly concluded that the "national emergency" is not about preventing illegal immigration or drug smuggling: "No, the goal of a national emergency is for Trump to scam the stupidest people in his base for 2 more years." Will Coulter prove to be a prophet? She's now predicting that Trump's presidency is also kaput: "The goal is to get Trump’s stupidest voters to say ‘HE’S FIGHTING!’ No he’s not. If he signs this bill, it’s over."

Impressed with her verbal fireworks, the Americans for Legal Immigration PAC announced its plan to draft Coulter to run for president in 2020. “It’s an honor to be asked by such a patriotic and important organization," Coultergeist responded. "They are obviously correct that I would make a tremendous president. But unfortunately, I’m against women working!"

"If elected, I will not swerve!"

Coulter wants to chop off as many heads as possible, including those of babies and children: "Trump proposes amnesty. We voted for Trump and got Jeb!"

Coulter told Bill Maher that she was a "very stupid girl" for ever having believed Trump, whom she now characterizes as a liar, gutless and a wimp.

The Uber-Trumpista
The Trump Retractor

Coulter told Bill Maher, "Here's how you get rid of Trump." Her plan to rid the White House of Trump? Just tell everyone that he lied about the wall. Duh!

Ann Coulter is like one of those crazy clowns with sand at the base that keeps popping back up every time you think it's finally down for the count.

When asked why Trump is “digging his heels” over his imaginary border wall, Coultergeist replied: “It is self-preservation because he is dead in the water if he does not build that wall. Dead, dead, dead.”

Coulter live-tweeted during Trump's dismal SOTU speech: "45 minutes in, we got 30 seconds on the wall. He better be breaking ground tomorrow."

Ann Coulter, if you're here, who is scaring the crows away from our crops? — Pete Davidson of SNL

Why is Ann Coulter here tonight? Because the right-to-lifers wanted everyone to see what an abortion looks like up close. — Rob Lowe

It's 56 days 'til Halloween, but I see that Ann Coulter's already in her skeleton costume. — Rob Lowe

"This is the shocking thing for your readers," Coulter warns us. "I believe everything I say."

Coulter devoted a whopping six chapters of her book Adios, America to immigrants and rape.

Senator Bob Corker accused far-right pundits like Ann Coulter and Rush Limbaugh of “completely” flipping Trump, adding that it was a “tyranny of talk radio hosts.”

Coulter’s view of Trump has changed, and the man she once called an “Emperor God” is now “the worst negotiator God ever created.” She explains, "He needs $20 billion for a wall, but he's only asked for $5.7 billion."

I just realized I'm not the only athlete up here. As you all know, earlier this year Ann Coulter won the Kentucky Derby. — Peyton Manning

Ann is against gay marriage. What is your thinking on that? If I can’t get a husband, they can’t either? — Jeffrey Ross

Coulter caused quite a stir when she tweeted: "How many f---ing Jews do these people think there are in the United States?" during a Republican debate she found too Israel-centric.

Ann Coulter has written 11 books, or 12 if you count Mein Kampf. — Nikki Glaser

Last year we had Martha Stewart, who sells sheets, and now we have Ann Coulter, who cuts eyeholes in them. — Pete Davidson of SNL

Ann seems stiff and conservative, but she gets wild in the sheets ... just ask the Klan. — David Spade

Ann Coulter is one of the most repugnant, hateful, hatchet-faced bitches alive. But it's not too late to change, Ann. You could kill yourself. — Jimmy Carr

How do I roast someone from hell? Ann, you are the only woman ever to sexually harass Roger Ailes! — Jeffrey Ross

The Airplane Rosa Parks (Trevor Noah, after her Delta Airlines twitter rampage)
Colt 34D (allegedly her bra size, but a man would have to drink a helluva lot of Colt 45s to want to verify that claim)

"They’re about to have a country where no Republican will ever be elected president again. Trump will just have been a joke presidency who scammed the American people, amused the populists for a while, but he’ll have no legacy whatsoever."

Ann Coulter wants black children to be flogged and humiliated in public: "I have to say I'm all for public flogging. One type of criminal that a public humiliation might work particularly well with are the juvenile delinquents, a lot of whom consider it a badge of honor to be sent to juvenile detention. And it might not be such a cool thing in the 'hood' to be flogged publicly."

"I am emboldened by my looks to say things Republican men wouldn't."

"That was the theme of the Million Mom March: I don't need a brain — I've got a womb."

"The ethic of conservation is the explicit abnegation of man's dominion over the Earth. The lower species are here for our use. God said so: Go forth, be fruitful, multiply, and rape the planet — it's yours. That's our job: drilling, mining and stripping. Sweaters are the anti-Biblical view. Big gas-guzzling cars with phones and CD players and wet bars — that's the Biblical view."

"I think [women] should be armed but should not vote … women have no capacity to understand how money is earned. They have a lot of ideas on how to spend it … it's always more money on education, more money on child care, more money on day care."