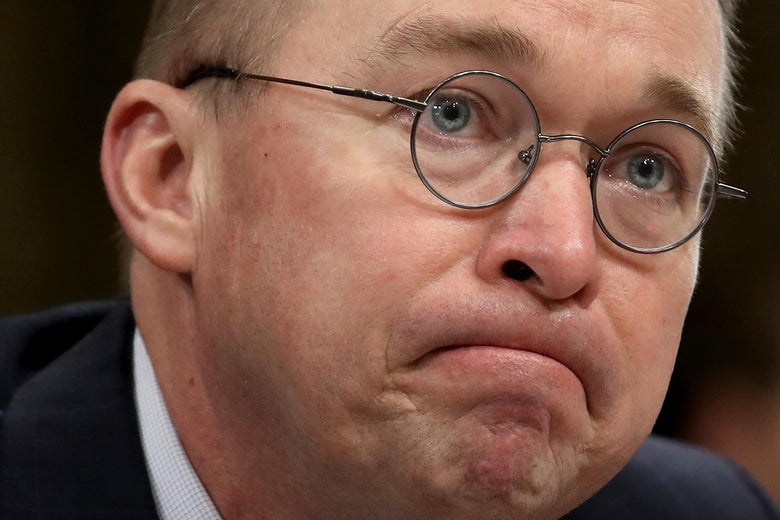 Mick Mulvaney descends from a long line of Angry Chipmunks. Fortunately, he's able to store lots of nuts in those capacious cheeks! But where will a certain yuge Wall Nut fit?

Mick Mulvaney's stint as Trump's nanny is now officially over; sadly The Demotee has earned Trump's ire and as a result has been banished to frigid, remote Northern Ire-land. But we predicted such an inevitability when we created this nickname page and called Mulvaney the Temp. Here's the evidence:

Scary Poppins is Trump's latest nanny. But the first time he errs and incurs Trump's childish wrath, he will forevermore be known as Nanny Boo-Boo. And because Mr. Pay to Play is an expensive man to keep around, he will also be known as Nanny McFee. (For example, Easy Money Mulvaney once told lobbyists that he wouldn't talk to them unless they contributed to his campaign!) But what will happen if the doddering Man-Baby suddenly remembers that his new nanny once called him a "terrible human being" and supported Rand Paul for president?

When Michael Cohen ended up in prison, Widdle Donnie Whinydiaper needed a new Fixer. And because Mick the Prick had successfully neutered the CFPB, he was the logical choice. Mulvaney confirmed his suitability for his new role by introducing himself as a Right-Wing Nutjob! So perhaps Trump should keep a certain tiny, toadstool-shaped appendage under wraps! But it seems more likely that Trump will neuter Mulvaney than the other way around!

We are working on suitable nicknames for Mick's replacement nanny, Mark Meadows. Here are our early Mark Meadows nicknames: Meadowlark Mark, the Earl of Sandwich (he owned a sandwich shop), Fat Nerd (a nickname he came up with himself), Mark the Narc, Easy Mark ...

With his firing, Mick Mulvaney has acquired some new nicknames:

We can tell Trump's mood by Mulvaney's position; either he's having his ass soundly kicked, or he's brownnosing Trump's:

In April 2018, Mick Mulvaney told a room of banking industry executives and lobbyists that as a Congressman he refused to take meetings with lobbyists unless they contributed to his congressional campaigns. Mr. Pay-to-Play said: "If you are a lobbyist who never gave us money, I did not talk to you. If you are a lobbyist who gave us money, I might talk to you."

“Stop, stop, just stop ― What are you doing? You’re fucking it all up, Mick.”—Donald Trump berated Mulvaney for suggesting he might take less than $5.7 billion for his imaginary wall

Mulvaney once said "a good shutdown" could fix Washington permanently. Presumably he meant "fix" as in "emasculate" and "neuter."

Trump called a former nanny, er "White House Chief of Staff," a rat, so "mouse" seems to be an upgrade.

In past lives Mick Mulvaney has been the Director of the CFPB and Trump's Budget Director. In his latest incarnation, he is the White House Chief of Staff and Graft (i.e., Trump's nanny).